Following a Habakkuk Trust Community Advocacy Action Team meeting held at Matobo ward 8 yesterday, the ward action team and local leadership are now set for the finalization and subsequent presentation of the community electoral charter. Speaking to Habakkuk Trust Information Department after the meeting, the Acting Headman Mr Simon Ndiweni narrated that ‘today’s meeting was an excellent one as we come up with something new in this community and the District at large. These electoral charter am confident will change the way we handle our electoral politics and our development agenda from now on’ The headman further explained that lack of clarity on issues, focused agendas and developmental vision has been the cause for electoral violence in the area and the country as a whole. ‘You see the main cause of electoral violence in this country is that we just put everyone and anyone to be a candidate. Some of the people when they see that they have nothing tangible to offer the electorate then they hire youths to intimidate and threaten political opponents. With these charters, am seeing politicians dancing to the tune of the electorate and this will minimize violence.’ Mr Ndiweni further called on Habakkuk to roll this concept to many areas of Zimbabwe and as well conduct trainings for the youths and the candidates so that they avoid violence. His sentiments were also echoed by Action Team Vice Convenor Mrs Tendayi Ndebele who said that ‘voting in peace is everyone’s duty. As an action team we are now challenged by this electoral charter and though we came up with some draft input today, we shall consult more and ensure that it is more detailed so that we create a new legacy for our children and our grand children.’ The formation of electoral charters is part of Habakkuk Trust’s programming meant to enhance peaceful citizen participation in key decision making processes. Specifically driven by Action Teams, this programme will entail the formulation of electoral citizen charters that will be accented to by community leaders and election candidates. Action Teams have also called for the programme to facilitate joint rallies where candidates will answer the communities on key developmental issues affecting the citizens.
Posted by HABAKKUK TRUST at 1:53 AM 1 comment:

Quite a number of people failed to exercise their right to vote in the just ended Zimbabwe referendum after failing to produce the relevant identifications. Only people with National Identity cards and current passports were eligible to vote, however because of lack of voter education, most people were ignorant of the correct documentation needed. This trend was noted both in urban and rural as people carried birth certificates, or photocopied national identity cards, expired passports as well as driver’s licences to try and vote. At Mthombowesizwe Primary school in Entumbane (Bulawayo) one eager person was turned away after producing a birth certificate. Some youths below 18 years but were of the idea that possessing an I.D was eligibility to vote were also turned away. Only those who turned 18 years on or before 15 March 2013 were eligible to vote. At Lukhanyiso Primary in Mpopoma (Bulawayo) one was turned away because the I.D was too old and damaged beyond recognition, while at Amhlophe in Pumula there was a similar case. ‘Aliens’ were also not spared as they were turned away in most polling stations in Bulawayo and outlying stations. At Cameroon Primary School in UMguza at a community that is largely Xhosa speaking, the Habakkuk Trust Observer Mission noted at midday about four people were turned away for having brought a letter from the church as they did not have national identity documents. At Esikhoveni and Mbalabala in UMzingwane a significant number of voters who were turned away had brought birth certificates
Posted by HABAKKUK TRUST at 7:27 AM 1 comment: 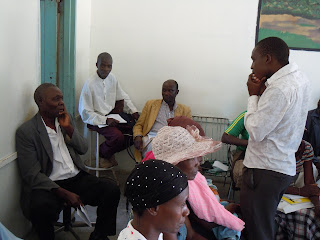 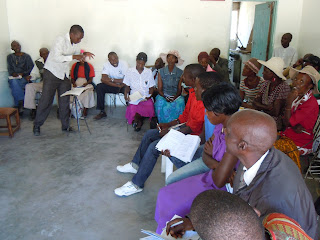 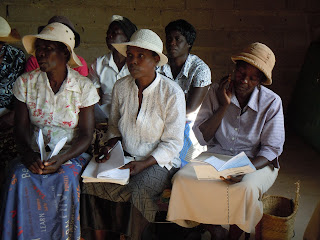 Devolution of power has topped the agenda during the Habakkuk Trust study circles that the organization has been doing with the community advocacy action teams in Gwanda, Matobo, Mangwe and Gwanda as community members vow to vote yes for the draft due to the devolution provisions. Speaking during a constitutional study circle in Gwanda ward 14, Mr Sibanda from the ward 14 Action Team, said ‘as long as there is devolution of power, I am voting yes for this draft constitution.’ The same sentiments were uttered by Mrs Gladys Ndlovu from Gwanda Ward 2 who said that ‘with us from this region, its all about the power to manage our resources and to determine our lives that is why I will vote yes for this constitution because it gives power to the provinces.’ Villagers in Mangwe ward 1 and 13 applauded the draft constitution for providing for more rights and for having provisions on provincial governments. ‘We have been advocating for basic services such as access to water and education and it has been a nightmare to have those issues resolved because of the centralized system. Now that we are going to have devolution of power, we see it as the first step towards addresses our issues commented Headman Zibuyeni from Empandeni. Speaking during the sidelines of a study circle in Ezimnyama (Mangwe) Ward 2 ZANU PF Councillor Mr Edward Masisa said ‘truly we cannot afford to miss this opportunity this time. From across political parties we just need to agree and accept that devolution of power it is the make or break of this draft constitution.’ Matobo ward 4 Councillor Mr Sibangani Ncube expressed similar sentiments to those of Councillor Masisa saying ‘this draft constitution is not perfect. There are some clauses that are not clear and some parts that we may not like. Even the part on devolution is not comprehensive but as an initial document I think we can work on it and improve especially on the devolution aspects’. Habakkuk Trust conducted the constitutional study circles to raise awareness on the contents of the draft constitution so as to enable residents to vote from an informed position. During the study circles Habakkuk Trust observed that there were very few people who had seen or read the draft constitution with only a few days left to the referendum. Khumbulani Maphosa Habakkuk Trust Programmes Officer to get live updates on the referundum like Habakkuk Trust's page: http://www.facebook.com/pages/Habakkuk-Trust/470074759723171
Posted by HABAKKUK TRUST at 8:38 AM No comments:

1 OUT OF 14 GWANDA VILLAGERS HAVE SEEN THE DRAFT CONSTITUTION 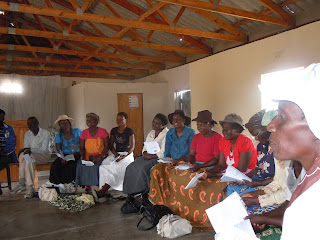 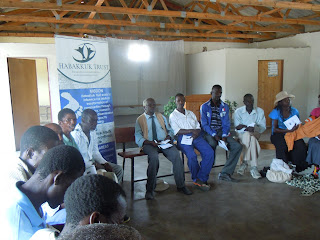 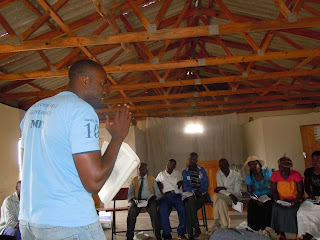 After intensive two day leadership training workshops held in 5 wards in Mangwe; Habakkuk Trust then held a Policy Dialogue meeting on Friday the 25th of January, at St Theresa in Plumtree in order to bring public officials to a round table discussion with community leaders from wards 2, 12, 8, 1 and 13; on how critical issues that affect those communities could be speedily solved. Invited were the MPs for the relevant constituencies, Senator L Tapela, MP Mkhosi, Minister Moses Mzila Ndlovu; and officials from the Mangwe RDC, the Plumtree Town council, representatives of the department of education and the Environmental Management Agency. Although Hon. Mkhosi could not be available, and officials from the town council were also a no show, the core of the Invited public officials and community leaders from the 5 wards concerned where sufficient to hear the communities’ problems deliberate on them and come out with stern resolutions. The issues that were on discussion was the pollution of Matole dam(raw sewerage has been flowing into Matole dam from plumtree town and border post), Livestock confistication in Plumtree, the construction of a school to service ward 1 and 13, and the socio-economic and environmental effects of mining in ward 8. The communities resolved to conduct peaceful defiance campaigns where Matole dam and the confistication of livestock are concerned if the relevant ministries do not address the issue by the 10th of February. With regards to the mining and education concerns, the community leaders have invited the education and the mining minister to come and engage with community on how their issues maybe best resolved. The Matole dam issue has been unsolved for nearly 3 years, inspite of extensive lobby efforts by the community. Ultimately the resolutions of the communities were decisive, and the People’s elected representatives, the MPs were tasked to take the letters the responsible ministers in the national executive. As a result of the policy dialogue meeting, the Mangwe RDC and the Environmental Management Agency have agreed to endeavor to solve the issue of Matole dam being polluted.
Posted by HABAKKUK TRUST at 6:32 AM No comments:

IZIMNYAMA COMMUNITY TAKES DEVELOPMENT TO THEIR OWN HANDS

Habakkuk Trust MANGWE: Izimnyama (Ward 12) community in Plumtree district lying in Matabeleland South Province has challenged most of the communities in Matabeleland Region by its development efforts. It has since proved to be a development oriented community, with a high potential of bringing positive change to the lives of its villagers. Lack of basic service delivery in the community is soon to be history, as the process of constructing a clinic and a recreational centre has already gathered momentum. The mobilization of resources has been done by the entire community with support from the local now based in the United Kingdom, South Africa and Botswana. Resources like cement, bricks, barbed wire among other things have since been mobilized. The Ward 12 Councilor Mr. Edward Masisa Ndlovu told Habakkuk Trust that “Izimnyama community is development oriented with the capacity to drive own development issues through its local resources’’. The Councilor praised the community members for the effort they are showing in bringing their project to a success. However the major challenge which is drawing back development processes is the unavailability of water. Councilor Ndlovu emphasized that, “water is generally our major problem in this area. However, we have since sourced a few water bowsers which will ferry water from Plumtree town”. Councilor Masisa Ndlovu is part of the community members that received capacity building in advocacy and development facilitated by Habakkuk Trust in 2011. He was also trained by Habakkuk Trust on the concepts of citizen participation, development and peace-building together with other Mangwe Rural District Councilors in the same year. Currently, he and the Habakkuk Trust Ward 12 Community Advocacy Action Team have been instrumental in advocating for access to water in the area so as to ensure the smooth running of other community projects.
Posted by HABAKKUK TRUST at 1:57 AM No comments:

RECOMMENDATIONS FROM THE BULAWAYO WATER SUMMIT

Habakkuk Trust shall continue its advocacy work on access to clean water for all and shall continue to lobby various stakeholders on the issue.
Posted by HABAKKUK TRUST at 4:52 AM No comments: